Blood. We all have it; I guess it is one of those commonalities that we take for granted – well, at least until we need a blood transfusion. There we are, in an emergency situation, haemorrhaging following childbirth, as I did, or through loss of blood caused by a road collision; whatever the reason is for your need, you can be sure that someone here, in a Blood Centre such as this on North Church Street right in the centre of Nottingham, will have enabled that to happen – simply by voluntarily donating one pint of their blood.

It is to witness one of these selfless acts, by regular blood donor Julian Hughes – along with photographer Susana de Dios – that we are here, as part of our research towards an exciting theatre project with New Perspectives based on John Berger’s A Fortunate Man – The Story of a Country Doctor, first published in 1967.  This research, with a host of co-collaborators from a range of artistic disciplines, will lead to a new piece of theatre that will first be shared at Lakeside in June as part of the NRTF conference.  One of the key aims of this timely research is to consider the state of the National Health Service fifty years on. 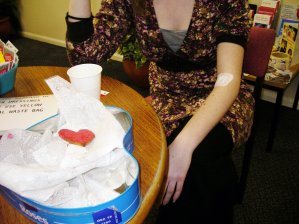 An image from Julian’s Friends, Lovers and Strangers project

You can sense my hesitation…it’s true, both Susana and I don’t like needles, so volunteering to observe Julian donating blood at least averts both our minds from what we are about to witness; except that, just as we are ushered towards a private meeting room, we are asked, quite rightly to leave, as this part is confidential. Julian laughs later as he tells us there are many reasons why people cannot give blood on that particular day – some of which you will know, I’m sure.  He also tells us that he gets nervous, even now – even though he has been donating blood for over ten years; his first donation being given on February 14th.  He invited, as part of a photography project, people that he knew for a pint, only for them to discover that they were going to give a pint, rather than drink one; many of these are still regular blood donors.

They, like Julian, having concluded their confidential meeting, will be ushered into a bright and relatively noisy space where each donor can see each other – it is not as I expected at all – not a curtain in sight!  He is invited to sit in a chair that is capable of being tipped right back; almost like a bucket seat that was in our red Ford Escort, back in the day when hubby and I were dating (I’ve learnt, people don’t call it ‘courting’ any more – it seems people seem to assume that you are some kind of offender!).  Anyway, whilst this Blood Donor Centre is busy, I am not convinced that making yourself as vulnerable as this is a precursor to the development of romantic relationships – although Julian assures us that people do talk over their tea, coffee and nibbles that they have afterwards, but he reckons he is about twenty minutes away from that currently.

Meanwhile, the needle, as it goes in, is described as somewhat “irritating” and “scratchy” – although I observe that his feet are no longer twitching quite so much with what I can only suppose to be indicative of a level of anxiety; think Jeremy Kyle on one of the many TV screens has helped to help take his mind off it. He laughs as he tells us, he once saw a snake being attacked by a mongoose as he gave blood, which had made him laugh and took his mind off the needled – he went on to state that the particular shade of blue that is in the room is comforting to him, as it reminds him of “engineering blue” (his dad worked as an engineer).

The nurse also helps to keep him chatting, as Susana moves effortlessly around the space, creating a photographic record of the event, as the nurse continues to chat, she then asks him about the project – at this, he visibly relaxes. She is very encouraging about the project, and is herself aware of the book; she goes on to say things like:

“You could do with staying a day here…see how it all works!”

“Every day is a different day; we get all walks of people here.”

With Julian’s blood flowing, she sets an alarm which beeps, slowly at first, but quite soon becomes faster and faster, until there is an audible increase in strength and volume, at which point, the nurse returns and informs him that he is all done:

Julian is astonished, as he tells us he usually finds the room quite cool, but today, as it is warmer, it seems to have “helped my blood flow quicker”. 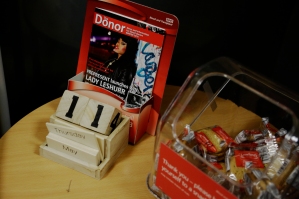 The needle is removed, swiftly and with precision, and soon we are all sat around in a comfy area surrounded by an array of sweet and salty snacks, and where cups of tea and coffee are drunk in a relaxed atmosphere where there must be a real sense of relief, and what I imagine to be a recognition of ‘doing good’. (Maybe I should check whether I am able to give blood myself now, having been told that because I had a blood transfusion prior to blood being tested for Variant CJD, that I would not be able to; as medicated as I am due to chronic pain and fibromyalgia, I think this sense of giving something back could only be a good thing. Those who know me will already know that I can indeed be a bit of a mad cow!)

We depart the Blood Centre once Julian feels up to it, and decamp to a local coffee shop where we continue to talk about Berger and Mohr’s legacy – their collaboration, and how we might be able to bring A Fortunate Man to the stage in a way that does this text, required reading for every would-be GP, justice; especially as we approach a General Election where the NHS could well be a key factor in how people might choose to use their vote.

After this session the EP members paired images with quotes from John Berger’s novel. Visit the full gallery here.